I've looked up through the trees at the sky. ”

Jane Heraghty, is a contemporary artist who works across disciplines including collage, watercolour drawing, printmaking and sculpture. Living in Cairns her work is affected by the fecundity of the tropical environment, the work is unruly, messy and bursting with movement, colour and acts of creation.
Her practice observes our ordered and regimented social and economic system and asks where is the room for madness and visionary myth, for magic and shamanism. She draws a circle in the sand and say here is my magic space.
Jane Heraghty is currently teaching in Far North Queensland, her teaching and art making practices are equally important and she finds the balance sustaining.

Cosmic Inflation  –  Review of Outside and Inside the Universe: Still Lifes

It was explained to me that ancient fishermen laid under the stars when the weather was poor and defined the universe instead. With the sand on their backs and the fire before their legs the stars hung in the vast dome like a muqarna, the famed Islamic ceiling.

The once deep and terrible void became the prickled surface of a glittering ocean, the vast dimensions a measurable and active fabric. Like an inverted mirror ball it radiated points of light towards them. They were at the centre.

Jane Heraghty flouts traditional coordinates. The up-down, the near-far, the then-now, the right-wrong. The infinite has no workable bearings. The centre is everywhere.

Entering the exhibition Outside and Inside the Universe in sun-filled Cairns you are apprehended by colour. But JH is not a tropical artist, she is an artist living in the tropics. JH is not transfixed by the tropic’s infamous colouration, but rather is hypnotised by light’s transfiguring surprises. The sunlight blazing through a taillight or an obscene orchid are equal.

JH is a the daughter of synthetics and chemical dyes. A child in 1970’s Italianate Mareeba she was rayon-eyed and pattern-possessed. While in the new front gallery at NorthSite her excited joy is palpably chromatic. As we discuss the show our laughter echoes loudly through the space.

In the studio JH pulls the velvet blinds shut, and by candle light arranges a collapsible tableau from a thoughtfully divined and arbitrary collection of photographs, objects, and carefully and uncarefully torn studies of the evolving work. With a bright pigment and gum arabic recipe JH determinedly reinvents her universe.

and small animal eyes look back. For the moment, forget the garden, the jungle or the flower. The universe has body parts.

In the studio the working elements are shuffled again and again. JH reacts to this entropic object-field emotively and paints fast and expressionistically. The baroque tableau cascades like a collapsed Merzbau but it’s fugitive form is arrested on heavy Fabriano paper. Amongst disjointed bodies, chaotic ribbons and unfolded landscapes cone shapes appear repeatedly.. but not the deadly Cone Shell inhabiting the local waters.. instead a model of a telescope-like apparatus, a cone through which we view the universe. We can only see so much at once. There is only one big lens. But a drawing or painting can simultaneously function as an Xray and/or a telescopic vision. This is clear evidence of Art’s unique range and compelling power.

Studio time can seem beside clock time and it’s no surprise to witness the tableau as a geological time-lapse or a video of a bulldozer pushing through a house in exquisite slow motion. Sometimes the sprawling topology in the studio is big enough to inhabit. The eyes and flesh of the paintings perhaps embody this collage and steer it through multi-point equilibria. This erupted, pageantry-like archive that is shuffled and reshaped needs a pilot.

There is plenty of humour within the scale of the undertaking and shows in the jokes found on closer inspection. Her conflation of the vacuum of space and the domestic vacuum is a fine example.

The artist is never situated in one position. The artist’s role in the studio, their position in the Art World, the world in general, and indeed within the infinite realm threads back to their inner vocabulary. It is Art’s base formula. To be everywhere and nowhere. Not to explain anything.

Weightless memory and it’s entropy, have been given form. The inner and outer universe have converged into interior constellations. Saturated with raw colour the artist joyfully renders her position within a seemingly impossible set of coordinates.

All artworks are available to purchase here. 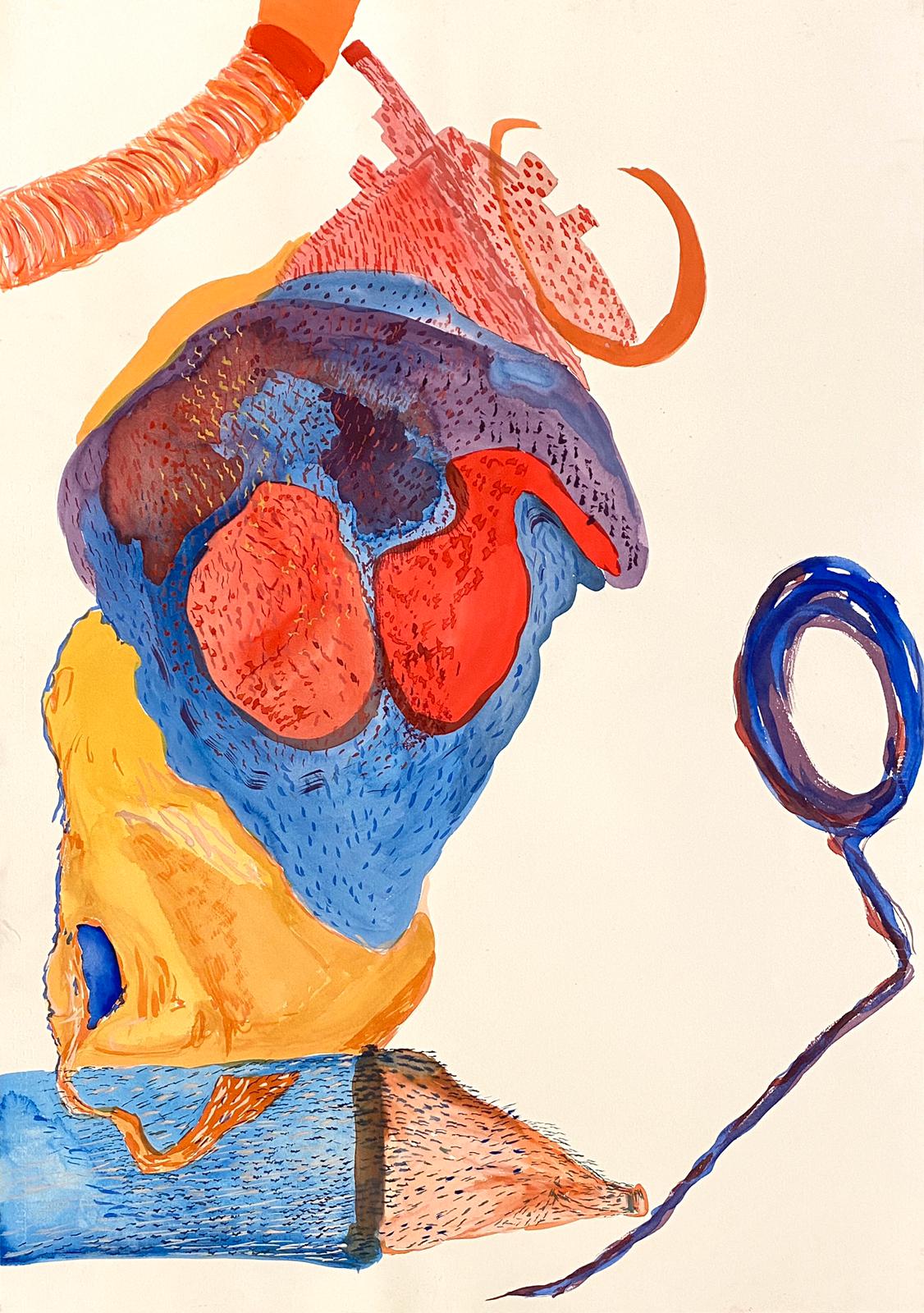 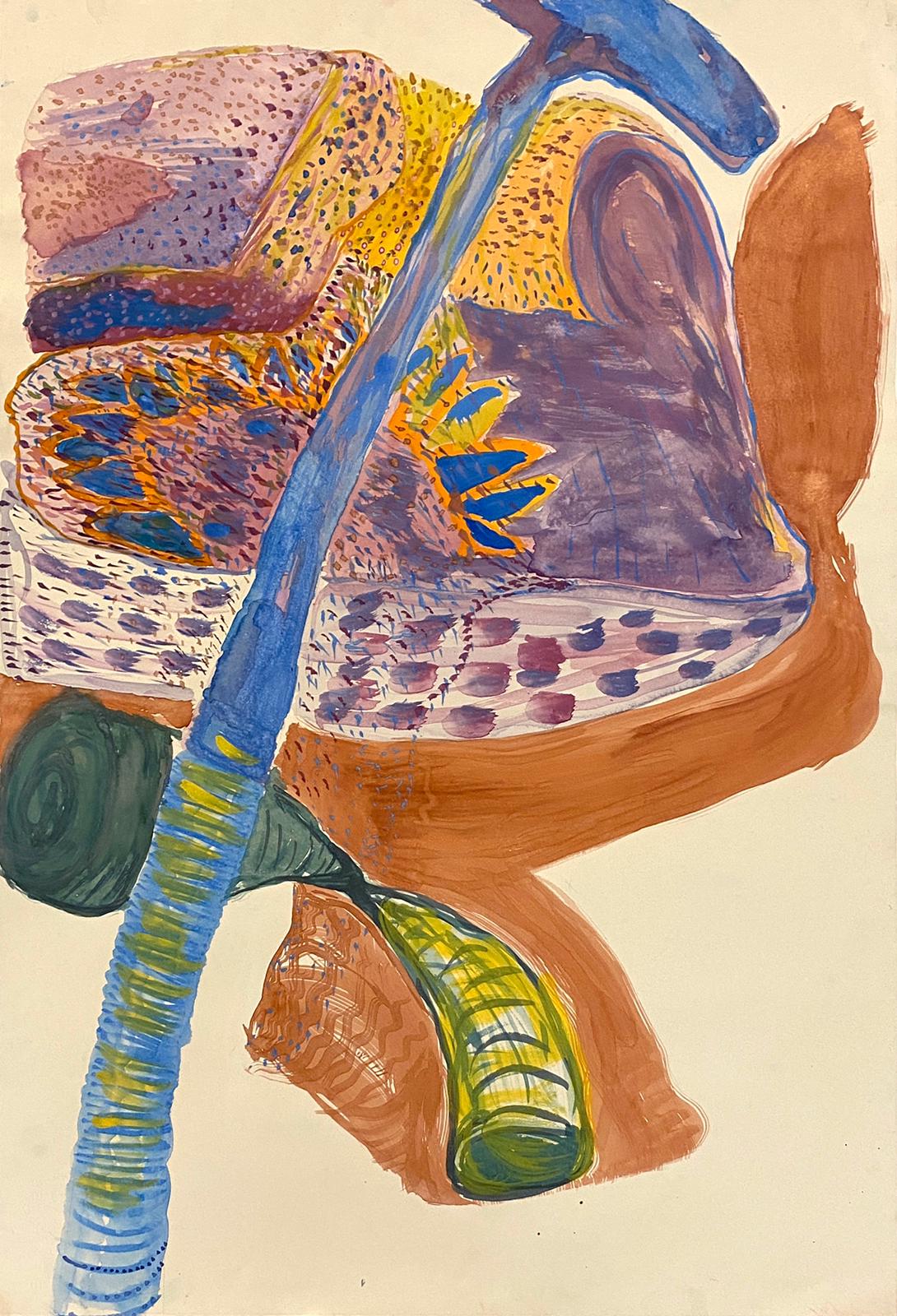 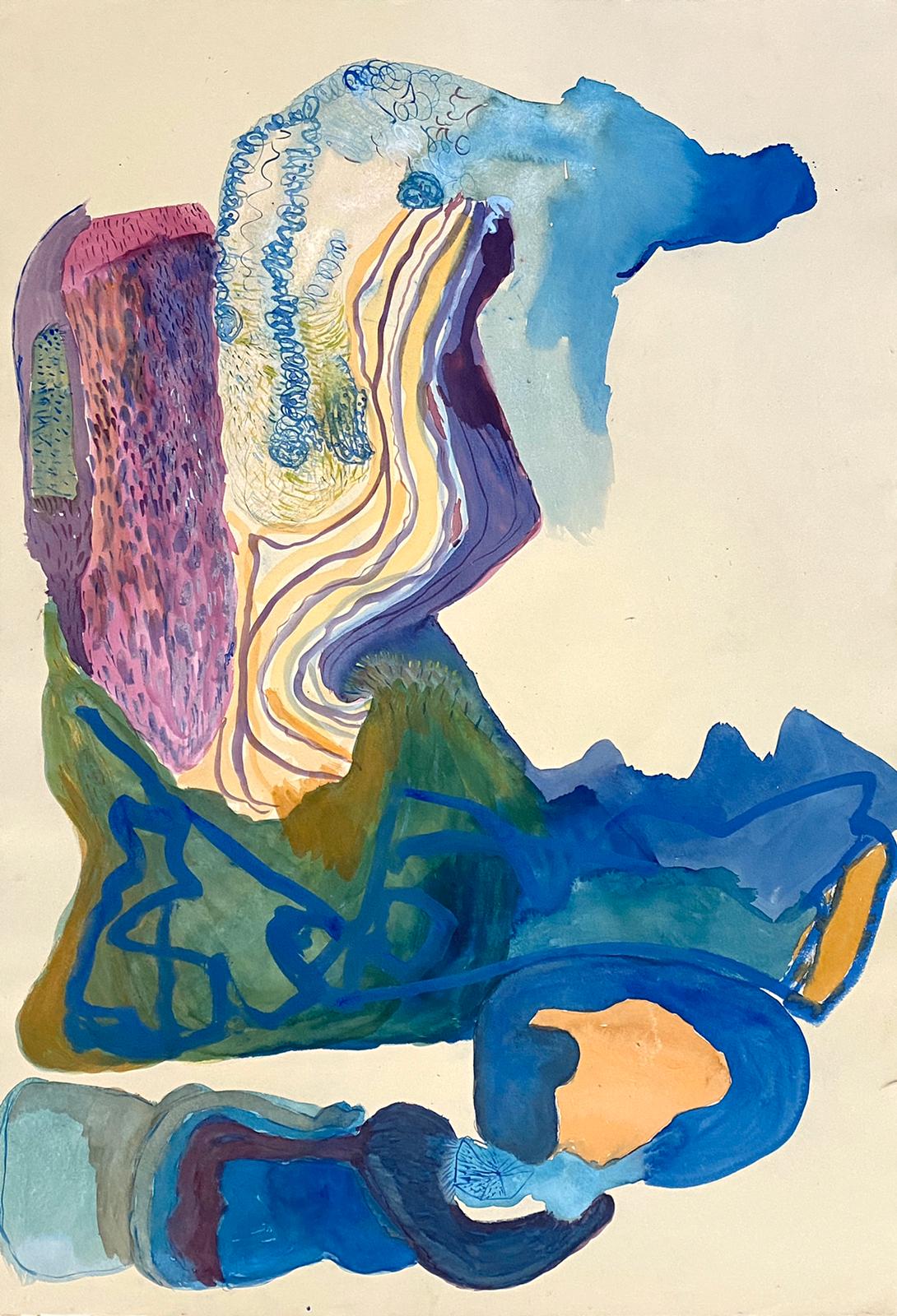 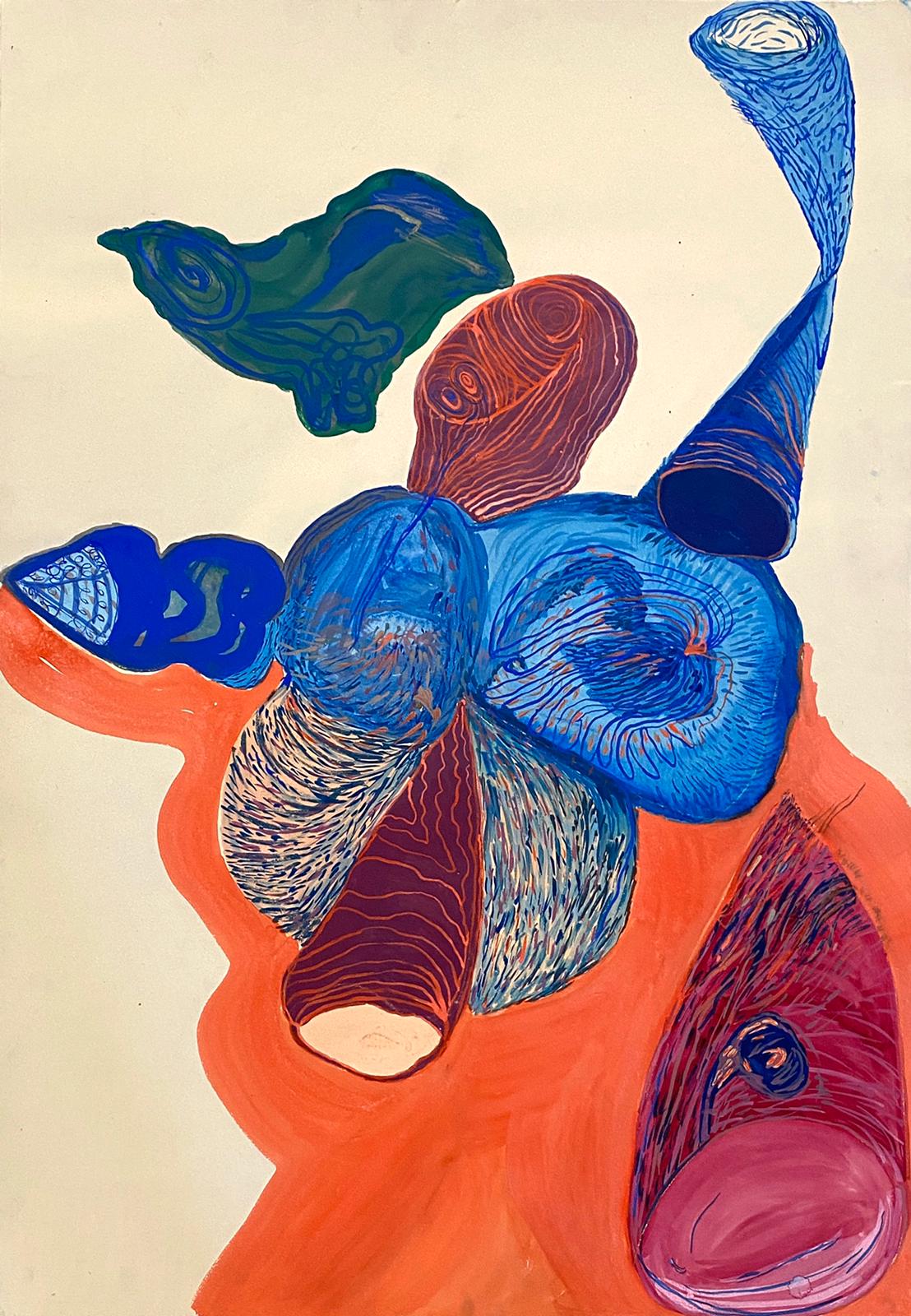 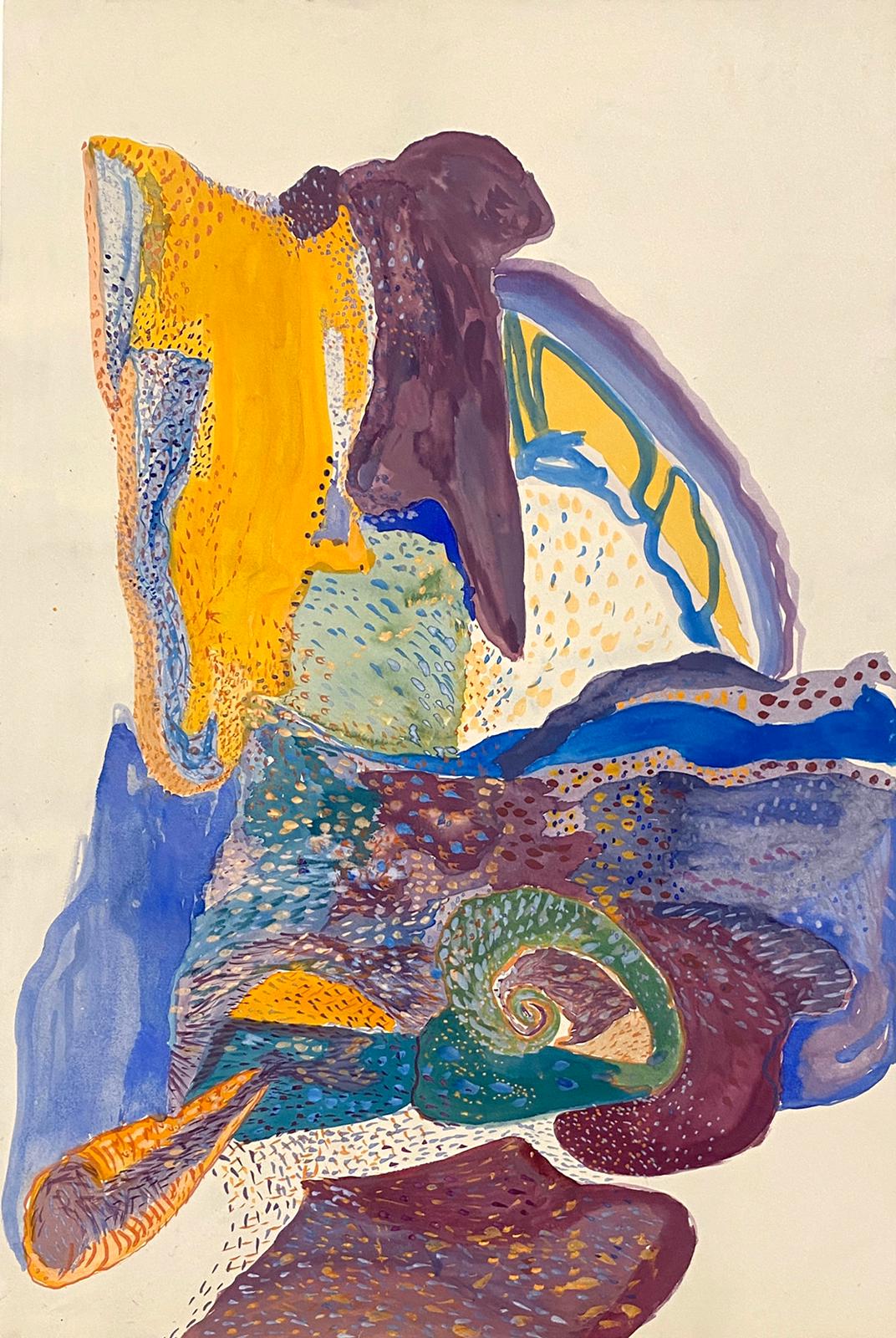 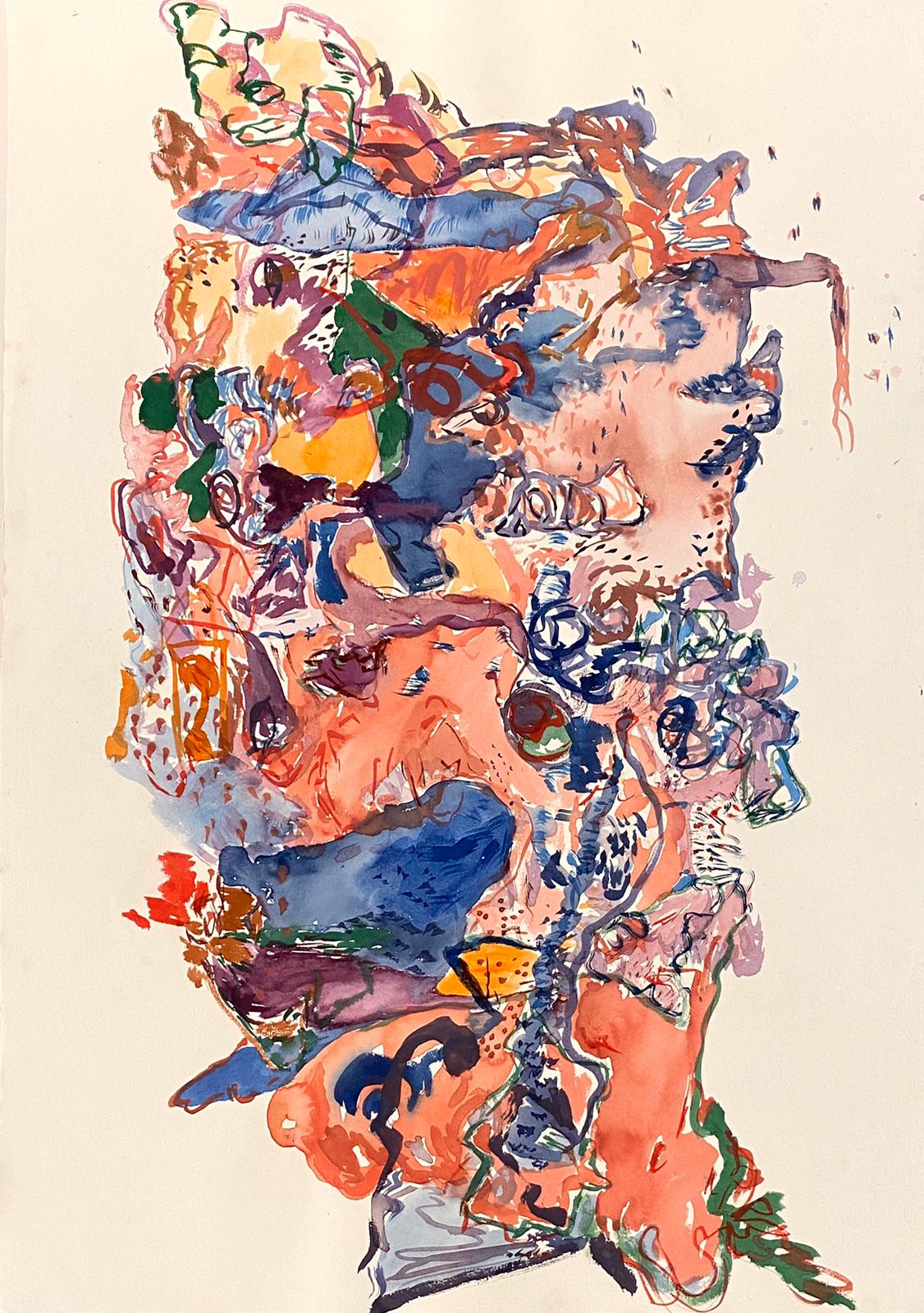 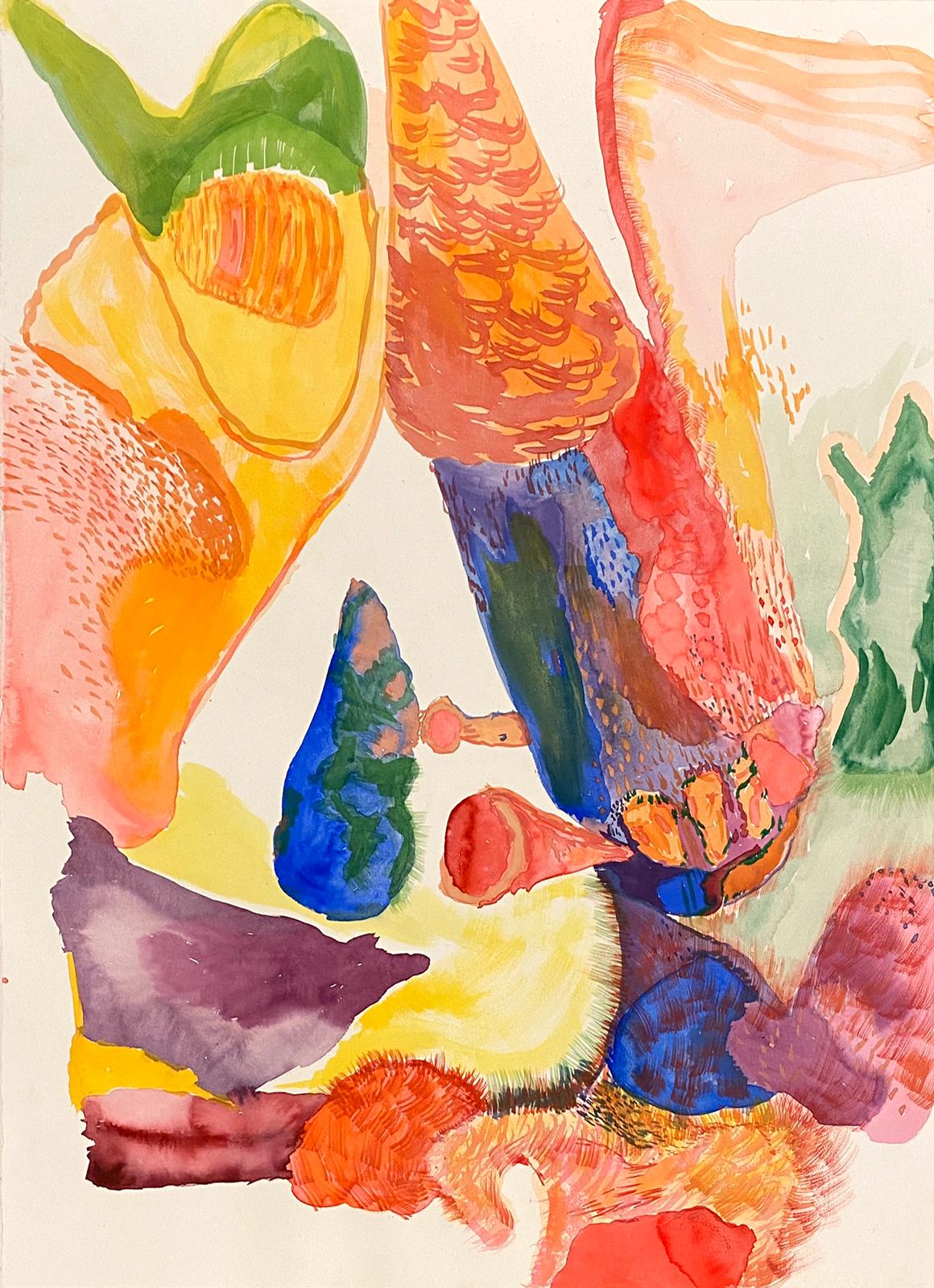 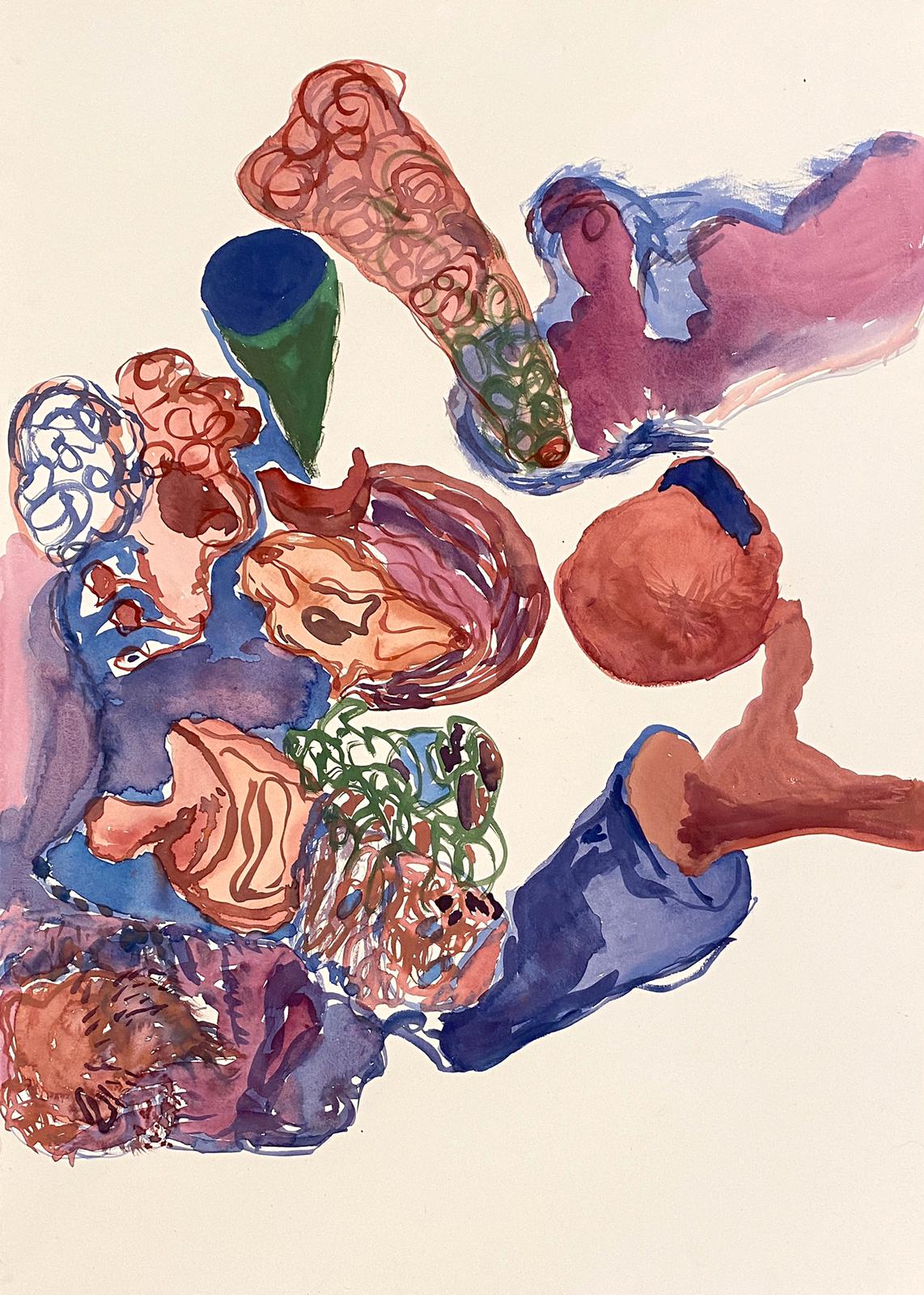 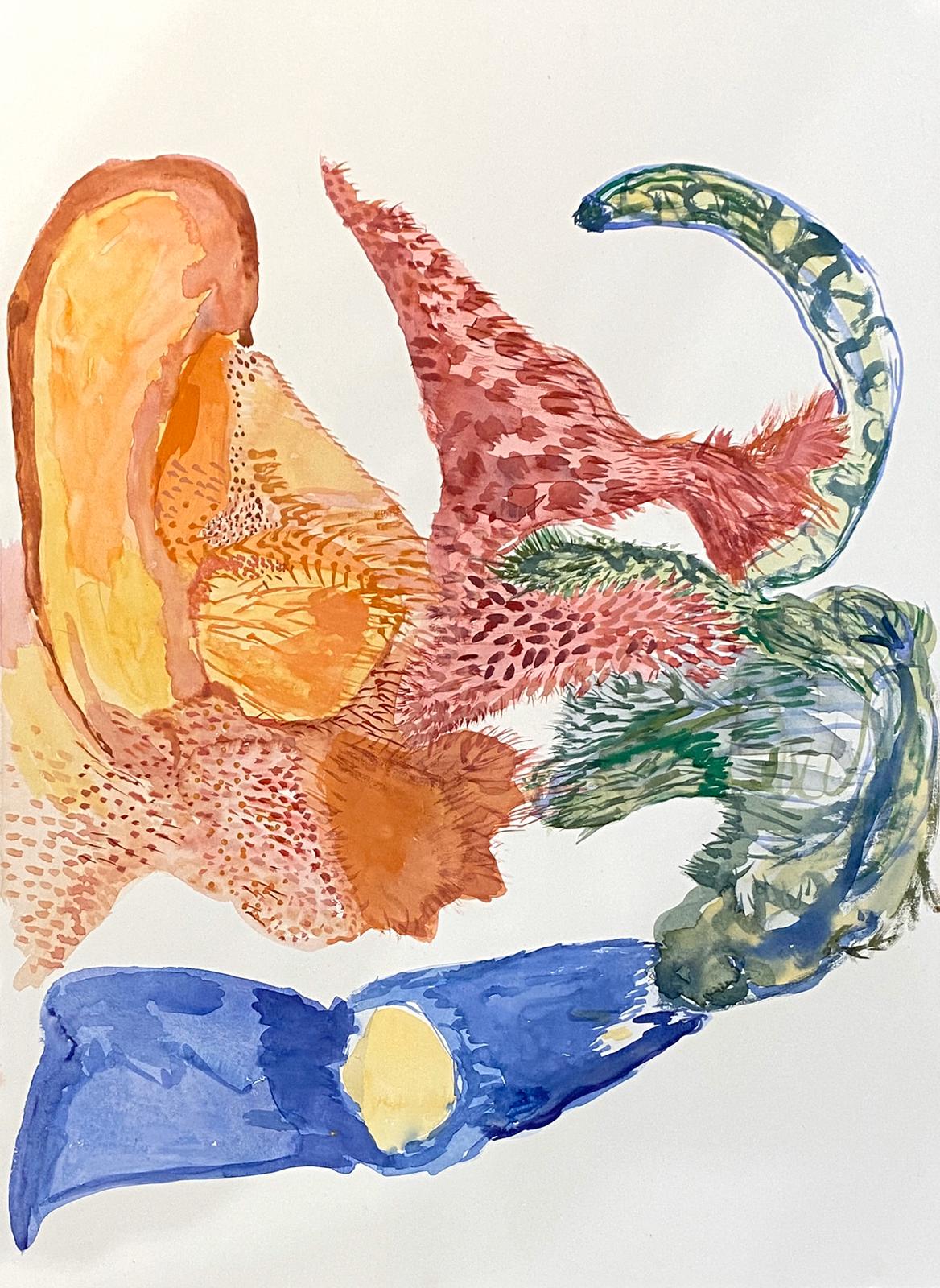 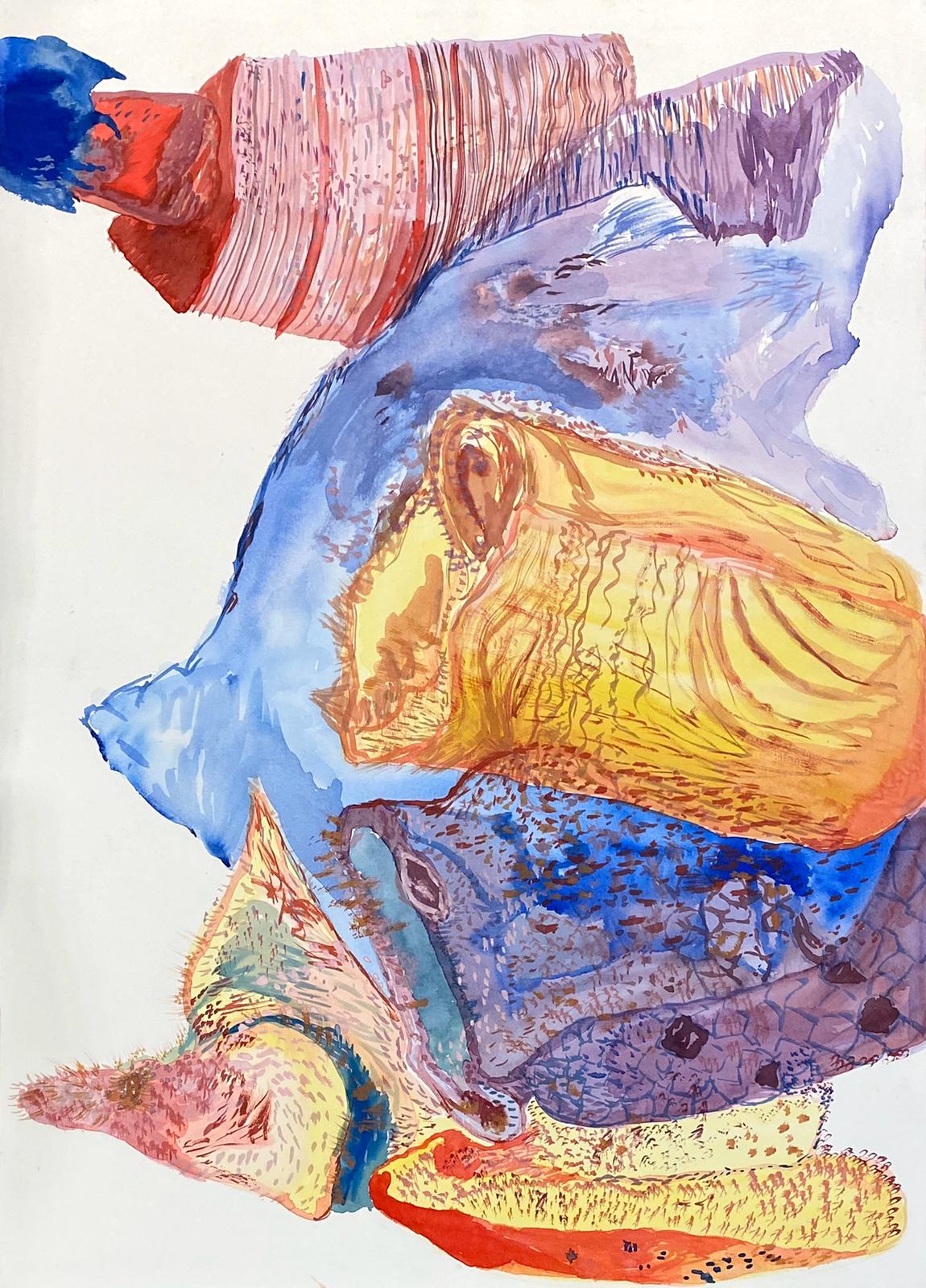 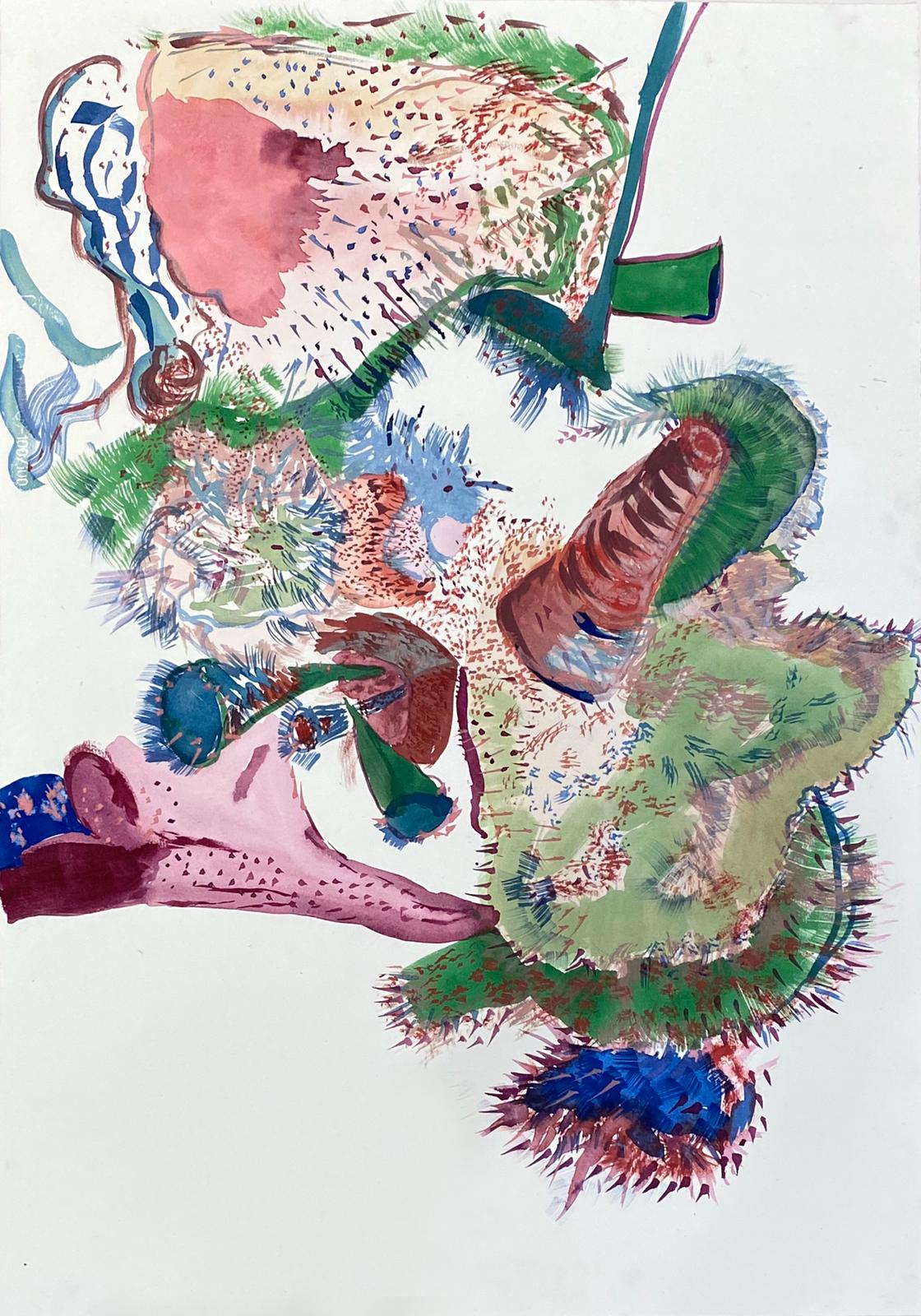 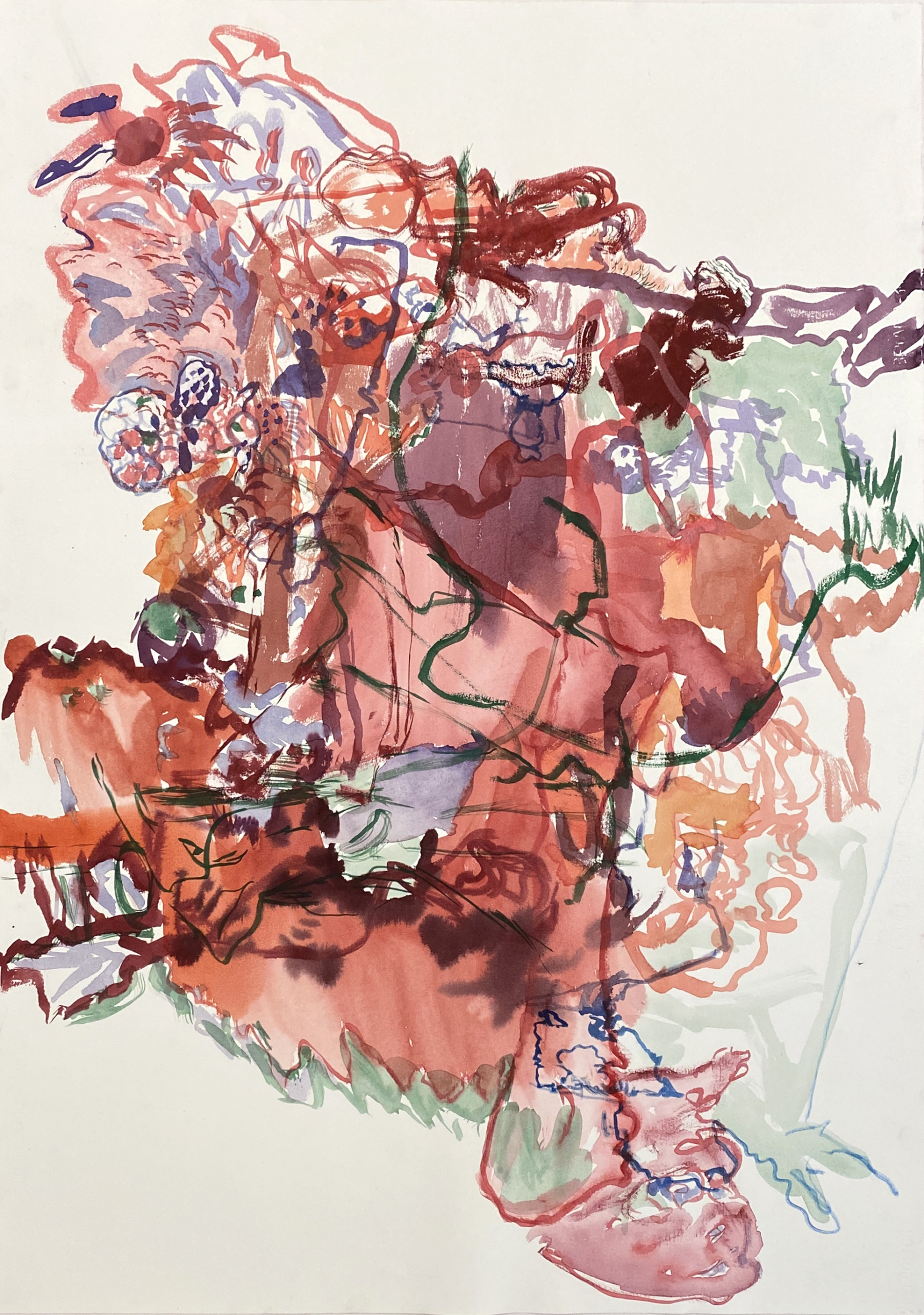 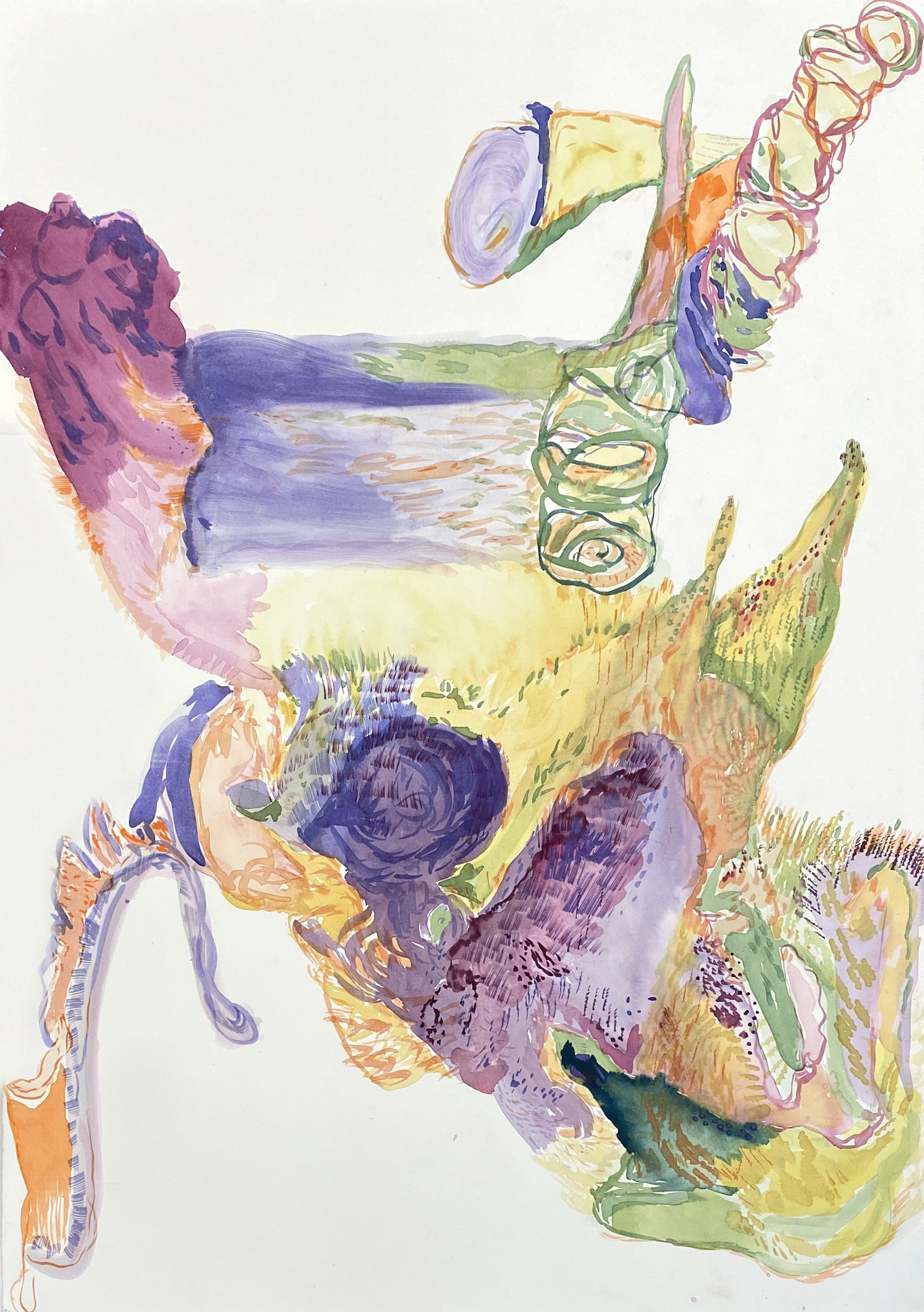 The Pack and Saddle

Anima and her fruit